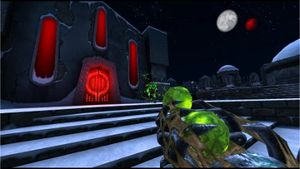 The Retcher is one of the nine weapons in WRATH: Aeon of Ruin.

The Retcher appears as a living weapon, launching green, crystaline spheres of toxins (called "Cyst") loaded from the top-mounted, open magazine. These spheres explode upon impact, delivering large amounts of splash damage. Combined with the low-arc trajectory of the Cyst projectiles, the Retcher's role can be compared to a grenade launcher. The primary fire lobs a single Cyst ball, and the secondary fire launches a triple volley.

The Cyst ammo can be not only found around locations, but also looted from the slain Afflicted.